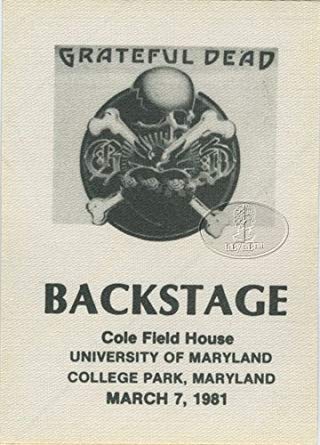 As I mention in the inaugural post of this site, of all the arguments, debates, comparisons, and ripostes in Deadheadland, the most fundamental of these always comes down to what is the Dead's best year. Of the thirty years to choose from, the most serious candidates usually come down to every year within their golden period ('68-'74) and 1977. Sometimes 1978 might creep up in there as well. But really, rarely if ever will you find a Deadhead whose favourite year comes from the Reagan or Clinton decades.

In my younger and slightly more foolish years, I limited my Grateful Dead experience to the '60s and '70s. I had myself convinced through no real watchfulness or evidence that by the '80s and '90s the Dead had become a drugged-out caricature of themselves, and I didn't want to endure the ignominy of Jerry forgetting entire verses of lyrics or having his guitar turned down because he couldn't keep up. The cumulative effect of my prejudice is limiting myself to a fifteen year period. Further, there isn't much to choose from in 1965. 1966 there is a famous show from July 3rd, but again, the quality of the recordings coupled with embryonic stage of the band, no one can make a case that 1966 resembles any kind of a signature year, that goes for 1967, too, when we only have twenty two fragmented recorded shows from which to draw from. The band spent the better part of 1967 recording their second album, Anthem of the Sun. That left me a twelve year period between 1968-1979 from which to receive my Deadhead enjoyment.

But as my co-editor, Benjamin Wharton, has correctly pointed out, a true Deadhead is crazy and devoted enough to love each and every period of the Dead's output, even the mid-'90s when they're playing sold-out stadiums and Jerry Garcia is a bloated and baffled shell of his former self.

Age brings experience. Experience brings some kind of semblance of wisdom. And wisdom most assuredly brings the self-awareness to reevaluate previously held beliefs and long-worn convictions.

1981 is a year unlike any in the history of the Grateful Dead. By every estimation, it should have marked the emergence of a new, energized Dead. Keyboardist Keith Godchaux, whose artistry had accentuated Jerry's playing throughout the '70s had left the band in 1979. Brent Mydland stepped in the role and by 1981 had integrated himself as full-fledged member of the Grateful Dead. He didn't have Keith's delicate virtuosity, but Brent had an unmistakable chemistry with Jerry. There is something in Brent's playing that invigorated Garcia. The year before, the Dead had released their eleventh studio album, Go To Heaven, and concurrently fulfilled their Arista contract for three albums. It would take another seven years before they released another. While The Grateful Dead avoided studios, record companies, and contracts for the better part of the '80s, the touring continued.

But instead of marking a new beginning, 1981 marked something else entirely. Jerry Garcia had begun smoking heroin in 1976 and the effects on his appearance are noticeable almost immediately. But it wasn't until 1982 that his playing and vitality on stage began to be suffer, as well. 1981 is the keystone year on whose one side is the legendary Garcia of the '60s and '70s, and on the other side is the Garcia of '80s and '90s, during which he survived a diabetic coma and was in and out of rehab for the better part of the last handful of years of his life. Check out this performance of Alabama Getaway on Saturday Night Live from April 1980. Jerry looks like a sick old man but plays like a tornado. The SNL camera people can't keep up with him.

Despite the harbinger of what will come later, there is much to love about 1981. The shows are fast-paced and raucous, no doubt propulsed by the preferred South American sourced drug of the 1980s. If 1976 was characterized by a change in style through slowing songs down, 1981 marked a period where they sped the shit out of just about every song. This first set from one of my favourite shows, March 7, 1981, at College Park, MD, will pump as much adrenaline through your bloodstream as a ride on a towering rollercoaster. Bird Song and Deal towards the end of the first set will get you off your damn feet.
Yes, as an alumnus of University of Maryland, and someone who still remembers watching Terps basketball at Cole Field House, this show has extra significance to me. I was not yet alive in 1981 but I can imagine the scene vividly: the high energy and excitement pulsating throughout the iconic fieldhouse as they torched the first set, and the spaced out hallucinations of the twenty four minute Jam>Drums>Space of the second set.

Which brings me to a very critical juncture. In my view, 1981 is so good it's even better than the hallowed 1977. Yes, I know for some Deadheads this would warrant cries of tar-and-feather, but a foundational ingredient of the Grateful Dead is weirdness. Their sound in 1977 was too accessible, too mainstream. They didn't get weird with it. Where are the 30 minute tripped out Dark Stars? Or the Mind Left Body Jams? Or the primal tribalism of Drums/Space? The boys embraced their dark sides in 1981, and we're all the better for it. 1977 just doesn't have enough...danger.

1981 gets me excited and I consider it the Dead's most underrated year, but it comes with some wistfulness, too. Like I mentioned above, 1982-1986 marks a down period as Jerry Garcia descends into the downward spiral of heroin addiction. 1982 and 1983 are particularly scarlet-lettered as substandard years. 1981 represents that overlooked year when the Dead embarked on a new period while harkening back to their psyched-out, high-energy roots.

Editor's Note: A previous version of this article incorrectly stated Jerry Garcia began smoking heroin in 1979. It was actually 1976. Thank you Dave Heumann for the correction. We regret the error.